As the name implies, the tummy tuck (also known as the abdominoplasty) is used to remove an excess of skin and fat on the lower abdomen that may become noticeable later in life, due to significant weight loss or pregnancy. At the same time it can be used to bring together the ‘strap muscles’ of the abdomen, which have often been separated during the changes in abdomen size.

There is often a residual ‘tummy’ that remains following a pregnancy or significant weight loss. Depending on the skin tone, liposuction may be indicated. However, should the skin tone be inadequate (we estimate in over 70% of women), there would remain an unsatisfactory excess of skin following liposuction. There is also the question of abdominal muscle separation during pregnancy that cannot be addressed by liposuction. The abdominoplasty procedure can address all three problems; excess skin, excess fat, and muscle separation.

This surgery can be performed under general anesthesia or under sedation and takes roughly 3 to 4 hours to complete. You surgeon will determine which type of anesthesia to use depending on the amount of surgery required and the status of your health.

A curved incision is placed just above the pubis in order to be able to ‘pull down’ the skin of the upper abdomen. The umbilicus (‘belly button’) is set free from the abdominal skin by making a small circular incision around it and leaving it attached to the abdominal muscles. 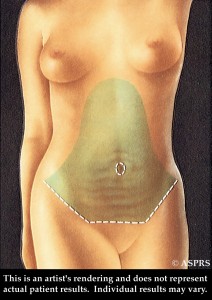 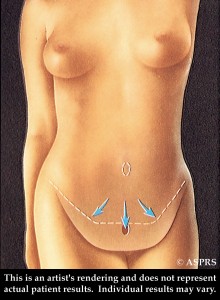 In general it is possible to remove all of the skin between the area just above the pubis up to the level of the umbilicus. The excess skin is removed and the umbilicus is brought through the newly pulled-down skin through a small incision.

Should it not be possible to remove the skin up to the umbilicus, less skin is removed and a small inverted ‘T’ is left as a scar rather than a smooth curved line at the level just above the pubis.

If the abdominal muscles are found separated, a series of sutures is placed to bring them together before the final skin closure. 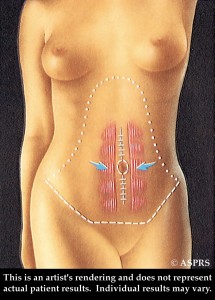 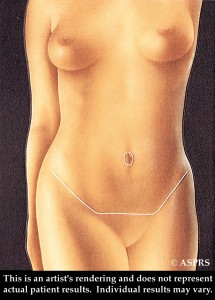 The wound is closed with sutures underneath the skin. Temporary drains are also left in place for about a week in order to minimize any fluid accumulation underneath the newly draped skin.

This surgery, when performed by qualified surgeons, can give spectacular results and is associated with an extremely high degree of patient satisfaction.

Alcohol in any form is not to be consumed for two weeks before surgery until two weeks after surgery. Alcohol has properties that dilate blood vessels and thin the blood that can contribute to excessive bleeding during and after surgery. Even a small amount can cause problems.

Cigarette smoking and nicotine intake in any form is strictly banned for the period of one month before surgery until one month after surgery. Cigarettes and nicotine contain properties that diminish oxygenation of skin and other tissues and can contribute to skin and fat necrosis (see below).

Should you have regular medications to take, ask your physician if you should take them before surgery or not. Certain medications can cause problems and only your surgeon can determine this.

You will have a dressing and drains following surgery and these will be removed about one week after surgery.

Avoid any activities that place strain on the abdominal wall. Avoid lifting objects that require the use of abdominal muscles. Do not lift objects heavier than a phone book. Your surgeon will advise you on the return to normal activities, generally re-established about four to six weeks after surgery.

The abdominoplasty procedure is used to remodel the abdominal silhouette. By removing excess skin and fat, and also by bringing together the oft-separated muscles, this surgery can often give spectacular results with an extremely high degree of patient satisfaction.

This surgery can be offered to both men and women. For men, though, the abdominal hair distribution will be changed after surgery.