When considering the rejuvenation of the upper third of the face, one should not ignore the descent of the brow. Patients often present to the office asking for improvement of the upper eyelids. The eyelids may have excess skin and fat, but one must assess the position of the brows. With age, the brows descend, particularly on the lateral aspect, which contributes to what is known as lateral brow hooding. This is not treated with a blepharoplasty. Rather, a brow-lift must be performed to correct the lateral hooding.

In the past there was one way to raise the eyebrows and that was by cutting the skin in the scalp region from one ear to the other, lifting the forehead and removing the excess skin in order to maintain the degree of brow-lift. There is a considerable amount of swelling, especially around the eyelids, for a few days following surgery. The surgery is well tolerated and problems are rare but may include some hair loss along the incision line, problems with scarring and problems with forehead movement and sensation should one of the minor nerve branches be affected.

In the past several years, a newer endoscopic technique has been developed which makes it possible to perform a brow-lift through small incisions through the scalp rather than the long incision in the classic brow-lift. Small incisions are placed well hidden in the scalp region and a small camera lens is introduced under the forehead skin in order to see and release the tissues that keep the brow down. Once this release is accomplished, the brow is lifted. The complications that can arise are similar to those of the classic brow-lift, except that they occur to an even lesser degree. The degree of lift that can be obtained with this new technique is not as great as with the classic technique and your surgeon can determine which method is best for you.

Anyone who cares about his or her appearance is a candidate for a facelift. As long as they are in good health, it may be performed on both men and women of any age. The recovery time from work is about 10 days for the endoscopic technique and 3 weeks for the classic technique.

Both classic and endoscopic techniques take about 2 hours to perform. They can be done either under general anaesthesia or with sedation. In our clinic, we prefer the second method because the recovery time for the patient is much less.

Classic Technique
An incision is made in the scalp going from ear-to-ear within the temporal hair-bearing skin. The top of this curved incision is generally placed within the scalp as well. However, if the forehead is very high, then the incision at this level will be placed at the hairline in order to avoid lifting the forehead further back. 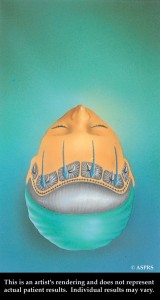 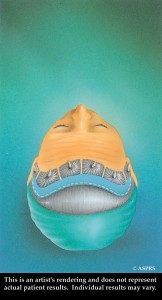 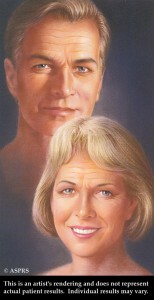 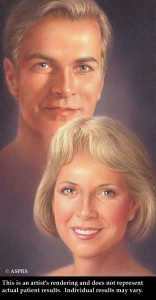 If the hair needs to be coloured, do so about a week before surgery since you will not be able to do so until about 6 weeks after surgery.

Alcohol in any form is not to be consumed for two weeks before surgery until two weeks after surgery. Alcohol has properties that dilate blood vessels and thin the blood and can contribute to excessive bleeding during and after surgery. Even a small amount can cause problems.

Cigarette smoking and nicotine intake in any form, including patches, is strictly banned for the period of one month before surgery until one month after surgery. Cigarettes and nicotine contain properties that diminish oxygenation of skin and other tissues and can contribute to skin necrosis and hair loss.

Should you have regular medications to take, ask your surgeon if you should take them before surgery or not. Certain medications can cause problems and only your surgeon can determine this.

Avoid any activities that can increase the blood pressure. Increased blood pressure can cause bleeding and swelling in the 2 weeks after surgery. For example, do not do the dishes, lift heavy objects, clean the house or perform any activities where the face has to be looking down for extended periods. Sexual and other emotionally charged activities should also be avoided for the same reason. Pretend that you are a monk!

Contrary to popular belief, sleeping on three pillows in not necessary. This is true for any surgery. However, try to sleep on your back since sleeping on your side may cause more swelling to occur on one side of the face when compared to the other.

Wash your hair in the shower every day using your regular shampoo. This will remove any crusts that develop around the sutures, making suture removal an easier task. The sutures placed in the scalp are very solid and can withstand gentle combing.

Your sutures will be removed about one week after surgery.

In order to reduce the swelling, you may place cold compresses over the forehead and eyes for the first 2 or 3 weeks. This may be done by using a facecloth dipped in ice-cold water and wringing it before applying. This will make you feel better, especially at the end of the day when swelling tends to recur slightly. Do not place ice directly on the skin as this may freeze the skin and cause skin loss.

If swelling is not an issue but there remains some residual bruising after 2 or 3 weeks, application of warmcompresses may help the bruising fade away faster. Warm compresses may restart the swelling, so use them with this is mind.

Dyeing your hair may be safely done 6 weeks after surgery. Hydrating creams can be used, but do not massage the forehead unless instructed to so since this may release the ‘internal’ sutures prematurely and cause increased swelling.

THINGS TO EXPECT SOON AFTER SURGERY

THINGS TO EXPECT LATER ON

There are 2 types of forehead lifts that can be offered today. The classic technique is more appropriate for patients who require extensive treatment of the lines of the forehead and whose brows require a significant amount of lifting. This carries with it a slightly higher risk that the newer endoscopic technique. The endoscopic technique, however, is more suited for patients who have less brow descent and require less remodelling of the forehead skin. You plastic surgeon will advise you as to which surgery is best for you